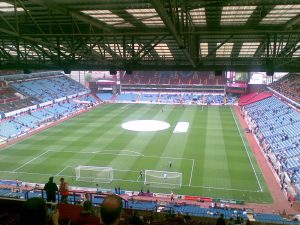 “If we had played Leeds, Boro, West Brom, Brentford and Sheff United then yes this would have been a good start. Stop with the bullshit Unbeaten ffs. “

“Three wins in a row for them. They usually try to play and knock it around their back three. I’ll take a repeat of last season right now. “

“I thought last season’s game there was one of our hardest of the season , so it’s a very difficult fixture.
If we come away with a draw or a win I will be over the moon.”

“Would dearly love a Villa win but my head says United will just edge us.”

“Looking for a response here…  poor late goal against Reading followed by a disgraceful performance in the cup.  All eyes on you now Steve!”

“These lot are a good side on great form, whilst we are struggling against poor sides. We desperately need a defence before I will have any confidence in winning games like this one, and we need Bolasie up to speed very soon. Until that happens, I fear the worst. “

“smell a defeat here. Their current form is enough to make the sphincter of our defence tighten in a morbid attempt not to lose. Given the nature of our sporadic performances, we’re due a league defeat. “

“I’ve got a lot of time for Chris Wilder and the way he sets his teams up. Successful wherever he’s been. Saw a few games during his promotion season at Northampton three or four seasons ago. High intensity, high press, looking for quick incisive passing in the final third. He’s now managing (having played for) his boyhood team.
Be a challenge for us for sure.
Which Villa will turn up? If we play as we did against Brentford for 70 mins, we might knick it. The midfield need to dominate and the defence will need to play well for us to get anything out of it.”

“Wilder has achieved far more in management than Dean Smith but never gets a mention for some reason.”

“Think this could a long 90 mins, United seem to be hitting some form. Hopefully Jack will be fit again. I didn’t really buy Bruce’s line that McGinn and Kodjia were injured too but maybe just a knock. Expect to see them back in the starting 11. Doubt Bolasie will be ready for this given lack of pre season.”

“Hand on heart, I am expecting SB to pack the defence and hope for a break away goal. Then when we go 2 nil down, he will play attack and it will be too late as they pack their defence and close the game down , BUT we still haven’t lost in the league Yet, so still a glimmer of hope”

“Big game this. Win it and we are pretty much back on track. Lose and Bruce is under massive pressure.”

“Lose this and the tide will start to turn against Bruce”

“Unless we play like we did in the 1st hour vs Brentford Sheffield will eat us alive and I’ll be angrily listening to Bruce taking about moving the ball quicker at about 5:30 again.”

“Away from home, hard game, made for Bruceball – keep it tight and try to nick a winner as we did at Boro last season around Xmas. Can’t see us getting more than a draw. “

“We will labour and struggle, create little changes and will have some Kodj or McGinn magic to thank for our point. Bruce will come out after the game and once again state that we moved the ball too slow, he didn’t tell them to play that way, he wanted us to move the ball quicker, and sharper and that we still have a way to go and we’re playing catch up at the minute. He will then bust out a rendition of Shaggy’s classic ‘it wasn’t me’ “

“Hopefully Sheff Utd stuff us by 2 or 3 & then we hopefully get a competent manager in during the 2 week break. “

“In many ways , the season starts Saturday. Feels like it’s been a dress rehearsal so far but now we are into September and proper business begins.”

“Winning at Sheffield United on Saturday will be the most Villa thing ever. You just watch”

“This fixture last season was one of the high points of the last few years for me, well the last minute anyway.”

“I am concerned that a fan might get stuck in a seat celebrating a goal . Those dirty northern seats are treacherous”