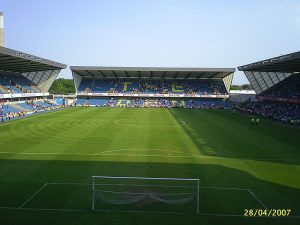 “5 defeats in 6 with Sheffield United, Forest & Villa to come”

“A decent performance is a must on Saturday.”

“Saturday will be a big test”

“it’s so rare we go away from 4-4-2 (apart from, naturally, later in games as they chase a draw/win) but we did last season against Sheff Utd”

“Saturday 3 points is up for grabs, that’s why I believe he tried a new formation yesterday, going on his comments in the post match interview, I think we will see a change as he was happy with the 352/532, Harris is a 442 person and he now has (not totally) come to terms with the fact that the way we play 442 is not working.£

“Herein lies our problem, a couple of months into the season and nobody has a fucking clue what our best line up is, least of all Harris. People were clamouring for Archer to be launched and he has, that Romeo needs dropping, Harris done that and has been rewarded with some well below par performances from McLaughlin. Then comes the AOB conundrum, Harris again brings in Skalak to no real avail then we come to Morison, an avalanche of criticism that he had to be put out to grass and again Harris done it at QPR and the Bradshaw Gregory combination was a washout.
Factor in the loss of Hutchinson, Saville and Jed Wallace’s, among others, mysterious loss of form and we are starting to look like a club in trouble. It’s hard to see where our next goal is coming from, let alone win. Even last night our goal was from yet another set piece, whereas Fulham casually just went up the other end and cracked home a absolute pearler from outside the area.”

“the signings we made have turned out to be a total waste of money as none of them is championship level, they are certainly not better than marshall and saville thats why we are playing shit. “

“Last year our passion got us through & lets b honest we had the rub of the green . I fear a long & difficult season ahead”

“the most powderpuff Millwall side I have ever seen.
I know the likes of Hurlock and Muscat would get sent off every game nowadays, so we cannot go get those types of players anymore. But, like you say, you can still be like Morison and play with that edge.
Yet, for all his talk of signing ‘Millwall type’ characters, look at our midfield… bunch of lightweights really. Where’s the steel? The nastiness? And if Williams is off the boil with his passing, then we are effectively carrying a useless passenger most games – as he won’t go ‘Right, I’m having a mare, but I can roll my sleeves up and get stuck in at least’.
We need to get back to have a whole team of tough characters with a bit of aggression (in that controlled modern sense); like when we had Craig, Dunne, Forde, Frampton, Harris, Alexander, Robinson, Abdou and Ward were all in and around the team.”

“ive never rated the prick Harris. It aint that hard getting out of league one even burton and Rotherham have done it”

“Not hard getting out of league 1, you obviously have not got a clue”

“Last season we had a lot of team spirit, but I still thought we were lightweight physically. It was our good attitude (‘fight’) that allowed us to beat the disinterested millionaires at other clubs, not our brute force.
Now we have the lightweight players that are disinterested too. “

“I was beginning to panic that we’d only have the long ball option for Saturday, a relief to know that Leonard can play so we’ll have the long throw too as our 2nd tactic”

“I actually think Leonard has the look of a decent replacement for Saville. “

“We gotta hope the Sheffield United team get their inspiration from their hooligans and turn up with false legs!”

It’s Saturday,
Cold Blow Lane,
Them Blades are once again here,
They’ve had their greasy chip butties,
And a glass of Stones’ beer

Come rain or shine,
All the time,
They bring a firm for a bit of a ding,
But as the Lions run on the pitch,
Everyone will sing…

Some fans may also like to check out a brilliantly detailed A-Z of Sheffield United that was created by a Millwall fan.

…..he also did one on our neighbours