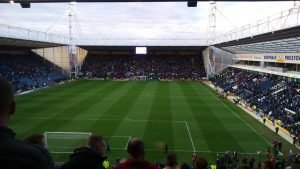 “Need a confidence boost from somewhere, a scabby win at Sheff Utd would do.”

“We need to get back to basics. That means get back a defence that can keep clean sheets. So first and foremost Rudd needs dropping. Carve out a 0-0 at Sheff Utd and go from there.
Truly depressing time to be a north ender.”

“Just when you thought it couldn’t get any more depressing than the performance vs Reading we just had to watch that vs Leeds. Reminded me of a sunday league side that had been on the piss all night. 3 points vs Sheff United are vital”

“We’re f****d. Rudd seems to be undroppable for reasons known only to Neil, Clarke is fucking awful but plays every week, Earl is massively overrated. Our defence last season was good early on because we had the Grayson mindset instilled and we were organised and solid. That has now worn off and we have no clue how to defend. 6 games in a row now we’ve conceded 2+ goals.
Barkhuizen plays 90 minutes yet again despite being a League Two player but Barker barely gets 10 minutes. Johnson was shocking again but we have no options because of our embarrassing indiscipline. It’s laughable at the moment just how bad we are.
F**k this season, I’m probably just gonna stay in the pub in Sheffield on Saturday.”

“Lose to Sheffield United and West Brom and Neil has to go, team selection and tactics taking us nowhere but down. Only one formation in his locker and it ain’t working, if he’s as good a manager as some think should be able to change formations during games if first choice isn’t working. Tried 4 4 2 at Norwich got beat so goes back to his favoured 4 2 3 1 that isn’t working, obviously losing Maguire and Bodin was a big loss that close to season starting but has had enough time to work out his best X1”

“Serious selection problems for Sheff Utd game but we are conciding goals which we didnt do last year and Rudd looking a liability at moment.”

“In just a few short weeks, we’ve gone from a level of optimism not seen in a very long time to a feeling of disappointment, anger and general apathy by what seems to be the majority of supporters.
We’ve had dips in form before but I don’t think the resulting meltdown has been to the levels we’re seeing now.
Will 6-7 points from the next three games make everything peachy again for the majority or has the rot set in?”