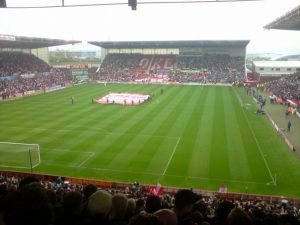 “sheff utd will tonk us on Tuesday. they were only promoted the season before last and are looking good.and then you have blackburn , wigan and Brentford who only came up last season, and all 3 are doing well in the league. I don’t think any of these teams have spent anywhere near what we have spent.we have too many individual players and we don’t play as a team.and as for bringing crouch and adam on ,surely we have better players on the bench than these.”

“I’m thinking they see us a an opportunity to get three points.”

“I thought one point tops from the two games against Brum and Sheffield U. I’ve revised this to none and if Stoke then don’t get a result against Bristol. Tone could be the man to get GR the sack.”

“I think 17th is an EXACT reflection of the sort of side we are.”

“First good side we have played we need to focus and work hard stoke supporters appreciate both those things lets hang in there till Xmas then bring in some nice presents who can get us up!!”

“This is the Championship, anybody can beat anybody.
I wouldn’t be surprised if we beat them.”

“We look like a team set up to do more damage away from home tbh, we’ll probably win.”

“Should have trounced Wednesday and Rotherham though. I’ve been to 3 away this season and they’ve been the 3 best performances I’ve seen.”

“At times Birmingham had 11 men behind the ball making it incredibly difficult for us to create something.Can’t see that happening on Tuesday.”

“despite losing on Saturday we bossed the game for the most part, we are certainly in with a good chance on Tuesday if Rowett can lift the side.”

“We’re on the verge of being a good side.”

“I think our performances have slowly improved though, since the Blackburn game. The pockets of cohesion are there and we just need to put it together for longer.”

“We have better players than other clubs, but they have better teams; there is a difference. We need a manager who can create a team.”

“they cost more and we’re paying them more. There’s a big difference between that and actually being better players.”

“we seem to become totally reliant on Tom Ince to create something as all McClean does is run up and down in straight lines. “