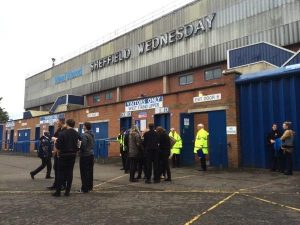 “No one can expect us to get anything from this game, we can have hope for sure but let’s face it they are a far better team that score goals and we are a poor team that can’t keep a clean sheet. So based on that we need to score 2 before it even starts”

“If Billy Sharp can manage a hat trick against Wigan, imagine how many he’ll get on Friday. I don’t think I’ve ever dreaded a derby this much”

“We are going to get mullered on Friday unfortunately! Wilder has something neither of our last two managers have had an eye for a bargain and real passion” “If the pigs don’t beat us by four or more then it’s a bonus. Anything less than 4 will be like a lottery win. Poor blades they’re in an awkward position lol”

“All the pressure is on United. expected to lose by 3 or 4 goals on friday “

“They’ve never had a better opportunity to give us a good thrashing. It’s why they’ve been flooding onto this site and radio phone-ins over the last couple of weeks. If they don’t win by at 5 clear goals they’ll be bitterly disappointed. It’s a shame for them that November the 9th doesn’t fit as good into a song like Boxing Day does. Now there’s a thought. Maybe we should nick their own shitbutty song off them? The thing is to show them they’re not getting to you before, during and after the match. Showing them you’re not bothered will upset them a lot more than if you give a reaction to their prompt ”

“Expected to lose and nothing to lose, all the pressure is on the pigs”

“Although dont want to lose to United, if its a narrow defeat and a battling performance then fair enough no shame in that. But really, really fear it going to be a humiliation that we will never live down.”

“I just hope it’s not too painful for us”

“Would take a similar game and result to last season, which sadly shows where both clubs are currently at.
Don’t expect to get it though, defence is a shambles no clean sheet all season, midfield easily overrun and an overrated forward line. (We’re great in every other department though!)
Hoping for the best but expecting the worst.”

“That seemed to be the case last year at theirs. Can’t see them taking us as lightly this time and if anything we look worse now than we did going into that game.”

“Perhaps Wilder and that lot will get so amped up that they fall flat… Probably wishful thinking tbh. We are so poor at the moment that I can’t see anything but a very long night…which is bizarre considering how we were 6th literally weeks ago.”

“if united don’t win by at least 5 it’ll be a miracle. We’ll be lucky to get nil and I’d snap your hands off for a 2 nil defeat as it stands. They could turn up in slippers and smoking jackets, brandy in one hand and still beat us. For some reason not one blade I’ve spoken to agrees and they are as nervous as me it seems. Weird bunch, after all, they’ve spent the last season and a bit telling us daily that they’re better than us. Wish they’d make their minds up.”

“We’re so bad that we have to resort to court cases that happened years ago, years in the league below that were over 18months ago and the fact were a bit older than them which so clearly proves our underlying superiority.    I bet all this will hit em hard despite walking over us on Friday.Oh and one more point. I’d rather have mcsue and the Poundland Prince running our club properly instead of the million dollar baby we have in charge of ours running it into the depths of oblivion “

“Even the pigs keeper is confident enough to stick his neck out on social media. Hope it comes back to bite him but I can’t see it”

“If we win – treat it like the world cup final and rub it in every pigs face like it’s the only thing that matters.If we lose – act completely indifferent as if it is the most irrelevant thing to happen since the announcement of the royal’s tour of Australia.“

“Win – win for us. They should win handsomely. Anything less would be a dissapointment for them. If we get hammerred then what with the last 4 results Jos would have to go. ?And then ofcourse, we might just bounce back after the Norwich debacle.”

“They don’t seem very confident. Pretty much all of them I have spoken to have said that anything can happen in a Derby. One thing I do agree with them though…. If Utd take an early lead our helps will drop and that could be bad news.”

“Most I speak to prefer being the underdog in this game, and being the favourite doesn’t suit them and might not suit the team either. Putting that aside CW will have them pumped up for it, something which I can’t see Jos doing unfortunately and that might see them through. CW clearly wants to win this, possibly more than any other, evidenced by changing stuff like the walk out music last year.  Dreading it, these games are never fun”

“They were particularly impressed with the world cup final celebrations with the draw in January .They have the FEAR, and yet in paper the odds are MASSIVELY in their favour. “

“Imagine if we win by any scoreline. There team of all conquering super men being beaten by our shower of s**t. Derby matches are funny games and anything can happen. Do i think they will win? Yes! but anything can happen. They are Sheffield United not 1970s Ajax.  If our team cant turn up for derby day they never will. The pressure is all on them and just like last season at there place it galvanised us and we got a point in difficult circumstances.”

“They’ll fall away like last year – they still don’t have the quality in depth to do it all season, not a chance. Plus they still have an aging donkey couple of centre forwards – it’ll all come crashing down after Nov/Dec again when they’ve been sussed”

“Yes we’ll probably lose. But the mood amongst Wednesdayites on here is reyt embarrassing. Let’s get behind the lads and show some positivity for two days at least. We can go back to moaning on Saturday. But come on, we’re older, bigger and BETTER than them. We’re running scared of Sheffield United ffs.”

“Horrid weather for Fri night. Wind, heavy rain. Makes it a lottery. Will favour their more agricultural style over our sophisticated Holland-1974 football.  Say it quickly; keep a straight face”

“If we turn these c**ts over it will be better than the Tudguy double IMO. Those DRAWB bastards are starting to think they’re fucking Barca.”

“us pipping them to promotion when they were however many points clear in 2012 was marvellous. And then for them to lose in the play-offs, outstanding times. They can bang on about beating us 4-2 and the ‘bouncing day massacre’ (so cringe), but that season will go down in Sheffield history.”

“We always seem to win the significant games between us. Boxing day 79, fa cup semi final and in our promotion season in 2012. Whatever happens in this game it doesn’t shape the future of either club although it will not doubt go on their honours board.”

“More worried that after this season Utd will have had 13 from last 19 seasons.  Our city dominance of the 80s and 90s and lengthy spells throughout time has been surrendered. Thanks to all the pretenders in charge that have aided in this.”

“The hatred on their forum is embarrassing compared to the stuff posted on owlstalk.”