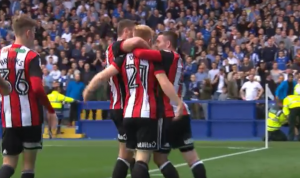 When Sheffield United finally got out of League One at the end of the 2016/2017 season they looked forward to renewing their acquaintance with neighbours Sheffield Wednesday after a 6 year absence of Championship football. With the Owls being only a Fernando Forestieri penalty kick away from the previous seasons play off final, hopes were high from the Wednesday fans that this time they could get back to The Premiership for the first time in nearly two decades. Whilst the Owls were among the favorites for promotion their city rivals United were expected to  be at the other end of the table scrapping for survival. Nobody believed this more than Sheffield Wednesday fans who before a ball was kicked made all sorts of predictions about United’s chances in the upcoming season. Here I present just a sample of those predictions. Taken from Owlstalk, the biggest Sheffield Wednesday message board, these posts will amuse many Blades fans who with the benefit of hindsight know how badly wrong these prophets of doom turned out to be.

“The Pigs Season in a nutshell: Initial good start as the Pashun and momentum from last season means they will start well and pick up a few points. Then the reality of the fact that they’re in a mesters league and the massive step up in quality will hit them. Their squad isn’t remotely good enough to cope with Saturday/Tuesday every week and I don’t think their world class strike force will have scored 10 goals between them by Christmas, leaving them in the bottom 3. Cue the suicidal calls to Pigs & Grumble saying Tufty has taken them as far as he can and that he isn’t a Championship Manager. Prince Bog Roll and McSue will then frantically cobble some money together and they’ll sign some more nobodies on the cheap before going down with a lower points total than the mini pigs.  It’s going to be hilarious. “

“These are the facts; Promoted with a weak team. None of which would get anywhere near our first team. Signed weak, lower league players. See above. Manager with no experience at this level. If any Utd fans can’t see this, they’re football knowledge is also weak. Maybe they do see it. Who’d have the nads to admit it though? Roll on November when their first XI are worn out, their replacements are dogger & they’re in bottom 3 & reality dawns. “

“Wilder will have them organised, they’ll play at a high tempo, they’ll have a few cheering them on at home. Nowt wrong with any of that, it might be enough to keep them up… But they are all expecting them to do better than that; I’m yet to speak to a Blade who doesn’t think they’ll finish mid table or above. There is literally no evidence to support this happening. I’d say the Blunts will be in for a shock from the off. “

“They’ve got no idea what is about to hit them this season. “

“one season of winning ,quite frankly, the poorest third division in some time and all of a sudden they are destined for great things. Absolute clowns of the highest order. It’s gunna be amazing when they are calling for tuftys head when they are flirting with relegation.”

“They’ll either languish in bottom-half-of-the-table mediocrity or get relegated, nothing else. “

“They really think that they are going to make an impact in the championship with a bunch of lower league nobodies with Billy Blunt and Ched the ripper leading the line. The only saving grace is that there will be 3 sides worse than them. “

“Dave Jones had us playing expansive football in our first few games back in the Champ. We thought we were going to kick major ass. Then everyone started scoring for fun against us like a hot knife through butter so Dave went turgid and defensive. I can see the same happening at The Sty just a hell of a lot quicker. They will go back down. “

“If I was a Blunt I’d be extremely worried.”

“They’ll certainly surprise me if they stop up. You will see the difference in class on the opening day. And Brentford are by no means a good side, but they have players who can really hurt you. They don’t “

“I’ll be surprised if United reach the 50-point mark – based on the current squad and calibre of the summer recruits/targets so far. Can only see a relegation battle for our neighbours”

“We tried to sign a bunch of “young and hungry” players and to rely on team spirit when we got promoted six years ago. We only stayed up by the skin of our teeth. We had better players than United do now. I think they’ll stay up but it’ll be a scrap all year.”

“These blunts really don’t know what’s coming this season do they .Are we taking bets on wilder getting sacked before Christmas because I’ll have a piece of that”

“The gap between L1 and Championship is an absolute chasm. Big dose of reality for dem blavdes after seeing their fixtures”

“I really really want them to be on about 3 points by the time they play us. A rude awakening awaits I reckon.”

“Penny will drop when they roll up at S6 in September, in the bottom three. Obviously robbed, cheated & very unlucky!”

“They really are in for one hell of a shock”

“I find it fuuuucking hilarious that Wilder seems to think the likes of Clarke, Sharp and Lavery wi score enough goals to keep them up next season. My word, is CW in for a shock. “

“Something that leaps out to me is the distinct lack of goals in their squad. Clarke – Absolutely useless at this level. Sharp – might get 10 but he’s way past his best and nowhere near as good as the grunters think. “

“Wilder is going to have to make them watertight at the back to get points, and they are far from that.   They need 10/12 wins, Bolton,  Burton,  Millwall and forest are the teams they will be looking to for 6 points – I’m struggling to see who they could legitimately get above other than that.“

“Looking at their squad it would be wrong to nail on certain relegation tag. However, if they are to stay out of trouble I would expect Dirty and agricultural style of play. A  heavy winter would be in their favour. Hoof Ball and rough stuff on the cards ! “

“Still not grasping how far the division has moved on since they were last in it. Bristol City only stayed up last season because of Tammy Abraham and they’ve had to spend £6m on a replacement, just to survive. “

“Let them have their moment. Let them give it the big un. But come the end of August when they’ll have less than 3 pts after 5 games they’ll all go quiet. When the realise the best player they’ve got in the transfer window was ched bundy they’ll shut up. “

“They might get the odd decent result, but these 46 games are alot tougher than the L1 46 games. If they can build up some decent home form they might be alright, but, all the promoted sides will struggle”

“The team they have now is worse than the one they were relegated with and missed out on promotion with the following year. Meanwhile, the quality of the Championship has improved considerably over the last 6 years. It really doesn’t bode well for them, but of course they’re far too thick to see it. At the end of the season, if they finish 21st and take 3 or 4 points off us they’ll see the season as a huge success and will be giving it large etc. Yawn. “

“Barnsley will finish above them which says it all “

“I seriously cannot wait for Barnsley to beat them at home. The sight of 20,000 Blunts plus a few more dressed up as empty seats crashing back down to reality is going to be absolutely f*cking hilarious.“

“My prediction is They’ll be in, and finish in the bottom 8 all year. “

“I think they’ll stay up. I think “PASHUN” and fight will get them more points at home than Millwall and Bolton, and I’d also expect the quality of the division to catch up with Burton. Barnsley look like they might utterly crash as well. That’s 4 teams who I wouldn’t be surprised to see finish below United. But I’m struggling to see any more.”

“They keep talking about momentum and, fair enough, they got 100 points and so yeah there may be a bit of that early on. We got 81 points in the league above and have finished in the top 6 the last two seasons; I’d muc rather have that momentum.”

“So lads, how many points are they finishing behind us? I’ll say 26.”

“How many points did ToyTown get last year? Blunts will get less. 15 points for them, If we are aiming for top two need at least 85 points so 70 point gap? We can only hope “

“As for finishing above us, they will be lucky to be in the same half of the table as us “ 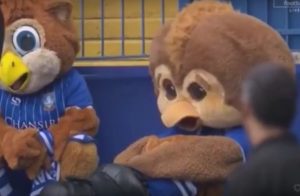 “Can see them finishing above Bolton Burton and Millwall, anything more than that and they’ve had a great season”

“Been funny seeing all the optimism slowly draining from the Blavdes as the big kick off approaches.Where’s all the “we’re coming for you” bullshit now? They’re in for torrid season and deep down they all know it.”

“ Some of of their comments about Wednesday are astonishing. They want to believe so badly that we’re just an expensively assembled shambles. They really want to believe that they’ve got this special “team” that somehow trumps ours, just because we’ve spent a lot. Their way of doing it (lower league gems spotted by the scouting mastermind that is Chrissy Wilder) is obviously much better than our way (signing proven players with experience of promotion from this division)”

“At the end of the day if we turn up (which we will) they might just need another ball. Even better if they turn up with their pashun and have a go at us instead of boring us to tears like Cloughs Burton then they could get a right Royal f**king pasting”

“THe best way and most fun thing to do is nod and agree with everything they say. Then in may just remind them of it. Simple but bloody fantastic “

3 thoughts on “The Pre-Season Predictions Of Sheffield Wednesday Fans”