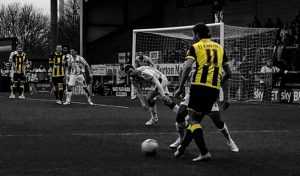 “They called the game off on purpose. Same conditions and without under soil heating at the Pirelli, had this been a home Brewers match it would be game on. Sheffield Utd doing a ”Bradford”. Scared of little Burton.”

“We need the ex manager factor to do for them.”

“A juggernought that could be turning, squad value 18-9 million,5 players valued about a million-3 internationals. Another hard working team we should get points off. They took the spoils at the Pirelli, but after about 6 seasons in div 1 our stadium would not faze them , Bramall lane now is a different ball game ,a hostile crowd and will encourage their team, Like Millwall will be in your face for 90 minutes ,any thing here will be a bonus ,weather maybe a stay of execution”

“I can’t see us getting anything from the Wolves game I’m hoping we can get another away win in South Yorkshire on Tuesday night. We need those three points.
Curious to see the team Nigel selects. Will he play the two strikers again?”

“Team selection is a tricky one. Cloughie has come up trumps many a time with the 5-4-1 away from home but I’m not sure it’s the answer now and most certainly not after this tough run of games coming up. Darren Bent is fit and has been with us longer than a pre-season now, 6 weeks? I think I’d say the same about Liam Boyce although I can understand a bit of caution perhaps. The only weakness on Saturday was a touch of creativity, that goal creating pass or centre. I sense the only player we have who has proved he can do that is young Davenport.Very difficult with our small squad but we have to stay in touch over these 3 games and surely we have to gamble ?”

“People saying clough out, if he goes who we gonna get?”

“Anyone but him” “Anybody. Literally anybody.”

“I’m getting to a point now where why should i care when the club don’t seem to. Should of had a managnent change before Christmas”

“The message enjoy our journey. With a base of about 3000 I am one of the few to have seen Championship football at the Pirelli. Looking forward to Bywater getting man of the match at Bramall lane.”

“I think we need to win half of our remaining games to stand a chance and considering our March fixtures we’ve somehow got to find some miracle wins from somewhere. Don’t think we’ll need as many points as last season but I can’t see anything below 47 being enough.”

One thought on “Pre-Match View From Burton”