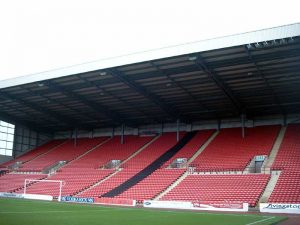 “Remember when we sent the blunts down at their place… oh how we laughed..
Well I hope our skin is on the collective thick side this Saturday .. may need to be”

“If being taunted at the game isn’t going to be bad enough, Reds supporting Radio Dee Darr listeners are in for even more. The presenters will already be salivating at the prospect of this. I certainly won’t be tuning in for the foreseeable. “

“they could get revenge for the season we sent them down and put a huge nail in our coffin.” “I think we will do really well just to get a point against a decent blunts side at the weekend but after that it’s **** or bust time….”

“we will suffer a humiliating defeat.”

“If we go 2 down on Saturday I’ll be walking out.
Of all the supporters in England they are the ones I’d least like to be facing in our situation. I can just see it now.
Could even be the last action I see this season.”

“I’m seriously worried about Saturday, I absolutely detest them as a club but unfortunately can’t see anything other than a defeat for us. To have them gloating and taking the piss will be too much especially if it gets to 2 or 3 nil.”

“If Sheff U play anything like they did against Cardiff then we’re in trouble. There energy and pressing alone will cause us major problems. Here’s hoping they have an off day. “

“They looked pretty useful against Cardiff. Have a job on to get 3 points on Saturday. Nowt new there tho”

“Cardiff were hardly impressive at oakwell. Just a thought.”

“they play the energy and pressing game that we had so much success with. Dread to think how whoever plays at left back copes with young Brookes. “

“No doubt Billy Blunt will get his annual goal against us . “

“Two wins in 25 games, both away from home, were doomed I tell you, doomed.”

“If we can get players around Kieffer Moore and he plays like he did on Friday we can win on Saturday….Its a massive game where only 3 points will do. “

“They`ll know what they`re up against and tek him art of equation early doors I would imagine.”

“My Sheffield United supporting Brother says they are more than capable of defending against players like Kieffer Moore, so the route 1 tactics probably won’t work on Saturday.”

“be a tough game Saturday , but just like a few years back , a result against the blades could turn our season”

“When we have lost to the Blunts in recent times it’s because McCabe has been paying big wages.
I think the last time we lost at home to them their centre forward was on £39.000 per week.
That’s not the case now. They have players of lesser quality than us now – if they beat us it will because they were either better organised or worked harder or both.
This game is there for Barnsley to win.”

“The only thing that gives me a bit of hope is that they need to win too and if they go for it there’s a possibility it could be an open game. I’m clutching I know.”

“Even if we were to go down anyway how desperate are we for just a little cheer, a win would be a massive lift to everyone And at least leave is with a positive memory for this season and a home win in 2018.”

“Saturdays game reminds me of when we played Hull City not so many seasons ago (was it the great escape season)? I went down to Oakwell fully expecting to lose and be put out of our misery but low and behold we beat them and there 6 thousand following 2-0.Lets hope for the same at the weekend.” “We’ve wasted gilt edged opportunities to build a gap or pull away. Only in the last few months we failed to beat a dreadful Wednesday team, failed to hold onto a lead at Hull, lost to Burton, failed to beat Norwich and Bristol at home, not to mention all the other 20 odd games before it when we haven’t gained maximum points.
I’m not sure we have 5 points left in us. And it’s unlikely Reading, Bolton and Brum will fail to pick up any more points.
We’ve been saying must win for over a month. The blunts is an absolute must win, if we don’t close that gap Saturday, i can see the last vestiges of hope leaving even the most optimistic. “

“It will be a long time before i forgive the club for the events of January 17 and this season. All that hard work 3 years ago pissed down the drain. And all the while clubs like Sheffield United & Millwall are thriving after their promotions.”

“Sheffield United spent six seasons in League 1. Do we expect to improve on their performance, especially as they had Brian the Blade?”

“I got punched in the head walking back to the train station the day we relegated them….. I didn’t have colours on and never even spoke to the bloke responsible so Christ knows why he picked on me!”

“If they go 2 0 up I’m going to put some ear plugs in and stay until the end to see if we pull it back. If we don’t I’m going to set fire to the Curry Mahal, where some of the waiters are Blunts.
After we beat Leeds in the famous January 2017 match I went in there for a curry, still on a high from the match. One of the waiters told me to stop going on about Barnsley in the presence of Blunts fans. I told him I was in my home village in my home town and I’ll celebrate what I want, and it was him who was on “away” territory. One of two other customers who were Reds fans backed me up. The t**t (there, I’ve said it) asked me to leave. His boss (Ash, for those who know him) intervened and the knob got a right telling off. My meal was free and the Blunt never bothered me again.
Might pop in on Saturday night if we win… “

“Even if we’re 5-0 down I won’t leave early, even if it means having to go home on the same train as them. After 50 years of watching us I’m immune to bad results. There are still people on here gloating about how we sent them down a few years ago when we drew 2-2 at their place even though they’d have still gone down with a win. So if they do help send us down this season they’ll just think that what comes around goes around. Call it korma. “