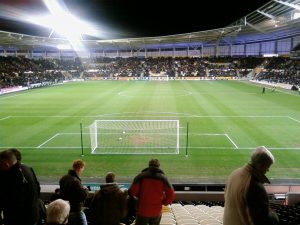 “Not much time to reflect on Middlesbrough as we play another play off hopeful. Sheffield United are on another good run of form lately and their attacking approach surely means goals against us. As long as Leon Clarke doesn’t bag another four I’ll live…
Can Adkins spring a surprise on his former employers? Well…I wouldn’t think so, no.”

“Personally I can’t see why any Sheff Utd would want to attend or watch the game. It’s obvious that Adkins will turn into Guardiola against his old club, seeing an easy 5 0 win with the sexiest football we’ve seen before a 10 games losing streak which ends in our relegation”

“I think what city fans need to realise is at the moment our team is of championship/league 1 standard
and nigel adkins is prob the same std?
and we should therefore expect no more
now if the owners had lavished the manager with gifts then we should be underwhelmed
last seasons squad if retained from last year would have surely gone back up as champions
but now we have nothing
nobodies
league 1 champions 2019?
maybe not even play offs?
time to get real methinks”

“When you listen to Adkins you think wow, did he really get promoted twice with Southampton? He sounds like a Sunday league chap, after being on the sauce all night.”

“In a perverse way I’d love to hear NA put a positive spin on relegation.
Well Nigel City are in league one next season..
Yeah, but we’ll be in the first round of the FA Cup.
Just think of the new grounds to visit. Think of the ticks.
Luton always bring a few”

“If Adkins is the answer then the question can only be “who do I need to see to get my insurance renewed”.
Not entirely his fault but Stevie Wonder could win this league with the squad we have.”

“He came from Reading with a lack of knowledge, he studied management at Scunthorpe college…”

“I fully suspect Adkins was told there is no money to spend, he was out of work and in desperate need of work. For all his positiveity and upbeat soundbites we are not cohesive on the pitch, no creative players on the pitch and its hit and hope. Adkins is proabaly suited better with a League 1 team anyway as it will be a re-building job when we fall into it, as in most cases whatever is happening at the top, lack of interest from the owners, eventually transfers onto the pitch.”

“What’s he supposed to sound like. He’s got a depleted squad, zero investment, 2 years of endemic failure on the pitch, fans who don’t care and an owner who has given up and waiting for his payout at the end of next season. He’s basically a palliative care nurse for a terminally ill club, helping it to die in the least painful manner.
The rugger is back on this week, Cheats old bean, so we can once again forget this nonsense, focus on a real sport. Let’s be honest, football viewing nowadays is for foreigners and second gen migrants who do the weird screeches, spakky hand signals, pidgin Ingrish innit and exaggerate that a tackle by Bellerin was ‘savage’ on fan TV programmes.
Best to cut the whole farce loose, leave it to the shit munchers and focus on something else.”

“I’m with him. the players didnt play for Slutsky, and they aren’t playing for Adkins. They need to wake up. Many probably think if they go down they will be bought. I’d put clauses in player contracts that tie them in for another season if relegated unless the club choose to sell”
“even the best manager in the world wouldn’t make much difference
we can barely compete against most championship teams”

“I think this is the worse team I’ve seen in a number of years.” “1 win against the top 16 teams”

“We’ve only won 3 points (out of a possible 39) from matches against the top 9 teams. Sheff Utd up next…”

“I hope Sheff Utd fans complain to the EFL & the FA about the pricing of the tickets. Maybe if other fans start to kick up a fuss then someone will actually sit up & take notice.”

“Once again Hull City fans have to apologise on behalf of our owners who claim to have the best run club in the football league. Thats why crowds have halved and stands have closed. No concessions for kids and OAPs for two years.”

“We apologise for the behaviours of those in charge of our football club who are inept and have lost interest. Sheff Utd fans attending the game may see many protests on Friday all part of a very sad story, with Hull City fans desperate for a happy ending”

“Based on opportunities to humiliate at any cost the Allams, strikes me (as we wont be on Sky any time quickly) this Friday is the only time to do so…”