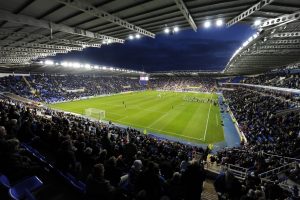 Sheffield United are next to descend on Reading for a top v bottom clash as their ascending star hits town to play Reading’s rapidly plummeting meteor. Expectation is that Sheffield will win fairly comfortably especially as it’s a home game on the telly and Reading just don’t really do very well in league games at home on the telly in recent years. However Reading’s overall form in play is very slowly on the turn into something better so if Reading get it right and Sheffield don’t there could be happy outcome for the beleaguered followers of the hoops. Sheffield United had a good start but, fortunately, it would appear that now is the best time of the season so far to play them as they have only recorded 2 wins from their last 8 games. However both of those wins were against currently struggling sides (Wigan and Brentford) while the 3 defeats they’ve suffered in the same run have all been against promotion contenders (Forest, Derby and Leeds). As ever Reading’s opponents are injury free while Reading’s injury list is still as bad as ever. So another hard game awaits then. Something that Reading will need to be on their mettle for otherwise it’ll all be rather disappointing again.”

“Think Sheffield United will come and do a job on us, they need to bounce back after their defeat to Leeds on Saturday. Can see it being 0-1 in a tight, dull game”

“Sheffield United can be quite inconsistent and I am confident we will get a point from this game.”

“Watched them a few times and they seem to start very intensely and then drop off as the game goes on . Need to keep them at bay in the first 20 and then I think we’ve a good chance of a result. Need to sit tight on Norwood and not let him dictate. Good manager there though, like what he has done with a bit especially talented side.”

“Sheffield have been powerhouses of wing play this season so we would be foolish to play with Wing Backs again.”

“they have not been very good as of late.”

“Ex royal Oliver Norwood is performing incredibly strongly across all measures looked at – he seems to have really clicked at Sheffield and is a big part of their form this season.”

” Would rather start with Meite in this one and bring him off if necessary. No way we could play McNulty and Loader against their defence from the start, they’d be eaten alive. Let Meite start and beat them up a bit, hopefully he can last for 60 minutes then bring McNulty or Loader on to run at them.”

“I think there’s a disproportionate amount of “doom and gloom” around the place at the minute. We’re not doing as badly as some are making out. I know we’re in a relegation scrap but considering the huge injury list, most games we are putting up a decent fight”

“Bolton and Sheffield Wednesday were both shi.t Considering they both beat us what are we? On those occasions an abomination now improving. But that’s the point. The division is shit.”

“The bottom 10 are for sure, some of the sides nearer the top have a bit of class. Derby, Sheffield United and Leeds (regrettably) are good to watch. Sheffield United should give us a footballing lesson this weekend, it is a must win game for them.”

“Prediction: New guy is lined up, he is spotted in the stands on Saturday watching the game. The players know that and put in the performance of a season, beating Sheffield United 3-0. Howe runs on to the pitch to celebrate, closely followed by the new manager”

“4 of the 5 longest serving Championship managers – Johnson (Bristol City), Harris (Millwall), Wilder (Sheff Utd) and Warne (Rotherham) – all featured for their clubs as players too. Appointing Murty or Parkinson might be a risk, but that stat shows a good trend.”

“I always thought the Sheff Weds manager looks like a Bond villain.”